2 Brothers On The 4th Floor 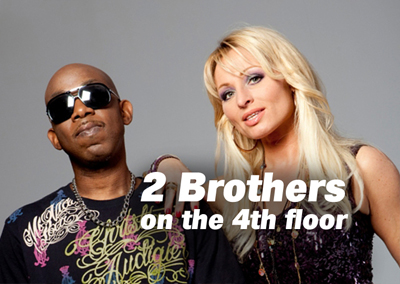 2 Brothers on the 4th Floor is a Dutch eurodance band. Since their creation in 1990, the group has been fronted by Dutch singer Désirée Manders (Des’Ray).

2 Brothers on the 4th Floor released the single Never Alone in 1993. This single was the first to be launched with rapper D-Rock and singer Des’Ray. The song “Dreams”, was a song that captured the essence of Eurodance. Due to the genre’s popularity when the song was released in 1994, the song became a hit both nationally and internationally. The band’s renewed style and concept was accepted well by Dutch audience. Never Alone topped the charts for weeks and went gold. Dreams, went straight to number one and remained on the charts for weeks (as well as reaching the top 30 on Billboard’s Hot Dance Club Songs chart in the United States) and Let Me Be Free, its successor, remained in the top ten nationally for some time.

2 Brothers on the 4th Floor further widened their success with the singles Fly , Come Take My Hand and Fairytales, changing their genre in happy hardcore. These singles topped the charts in various European countries. At the end of 1996, the band released the single There’s a Key and its second album, 2. After 2, the band shifted styles and first recorded the single One Day, an R&B track that departed from their typical Eurodance style, before going back to their previous Eurodance style with the single I’m Thinkin’ of U.

Today, 2 Brothers on the 4th Floor, are still touring to give very good shows at 90’s festivals, private shows, etc.