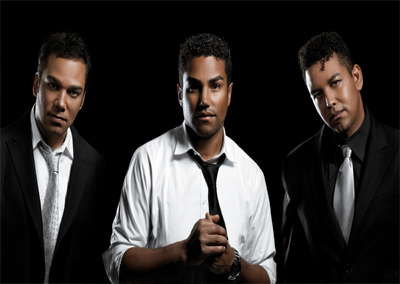 3T released their debut album Brotherhood in 1995. The album sold approximately three million copies worldwide. The group achieved an international hit with their debut single “Anything”. 3T released several hit singles in Europe, including “24/7”, “Why” (a duet with their uncle Michael Jackson), “I Need You”, “Tease Me” and “Gotta Be You”. In 1996, they were ranked second behind the Spice Girls, as the biggest-selling group in Europe. In early 1997, they went on a hugely successful European tour with their album Brotherhood, which included all of the songs from the album.

3T continued to perform in France, the Netherlands and Belgium. The album titled Identity was released on March 23, 2004. Two singles were released: “Stuck On You” was released in 2003 in France and Belgium and in 2004 in the Netherlands, and “Sex Appeal” in 2004. Neither single was released outside of Europe. In 2008, 3T made Identity.
All three of them appeared on the A&E TV show entitled The Jacksons: A Family Dynasty They appear with their father Tito, who is trying to convince them to relaunch their career.

On January 31, 2010, the three brothers appeared on stage at the 52nd Grammy Awards to support their cousins Prince Michael, Jr. and Paris Michael Katherine Jackson as they accepted the Lifetime Achievement Award on behalf of their father, Michael Jackson. On February 1, 2010, all 3 brothers then appeared in the remake of “We Are The World”, this time in aid of the Haiti Appeal.

On October 8, 2011, 3T performed at the Michael Forever – The Tribute Concert. They performed The Jacksons’ track “Heartbreak Hotel” followed by their own number 2 hit single “Why”, which was originally a duet recorded with Michael for their 1995 album Brotherhood. At the end of the performance of “Why”, all 3 brothers broke down into tears. They then appeared in the finale of the show performing Michael’s hit “Don’t Stop Til You Get Enough” with various other performers from the concert as well as members of the Jackson family who had been in attendance, including Michael’s children Prince, Paris and Blanket (Prince II).

Taryll, who has been working on solo music for awhile, released his debut solo single “4Ever” on April 5, 2012 from his debut EP, My Life Without You which was released on Mother’s Day 2012, May 13 in honor of his mother Dee Dee Jackson. On his birthday, August 8, 2012, Taryll released the single “Best of All Time”, a tribute to his uncle Michael Jackson. The single is taken from his second EP, Undeniable which was released on August 29, 2012 in honor of Michael.

After almost two years away from the stage, 3T performed live on stage in Rome, Milan, Torino and Verona during four charity concerts in Italy from December 5 to 8th. 3T performed a 30-minute show and the set list featured ‘Stuck On You’, ‘Anything’, ‘I Need You’, the new song ‘Forever Girl’, ‘With You’, a jam session (Ed Sheeran’s ‘The A-Team’, Oasis’ ‘Wonderwall’ and ‘Give Me All Your Lovin’) and ‘We Are The World’.