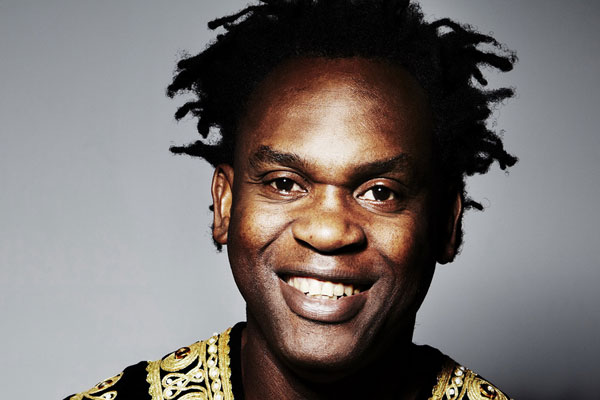 Alban Nwapa was born in Nigeria. He grew up listening to Fela Kuti and James Brown. At age 23, he began studying dentistry. In order to be able to finance his university studies the music-loving medical student started making his own music. During this time Alban worked as a DJ in the well known Stockholm club ‘Alphabet Street’. Very quickly his name became widely known, especially since Alban often sang to the records he put on the turntable as a DJ. DJ René couldn’t help but notice him and so the highly intelligent medical student was discovered. But first Alban finished his studies and even opened his own dentistry practice.
In 1990, he met Denniz PoP from the SweMix label. Alban laid aside his dentist’s drill and realised his dream. Together with Denniz and Rap-Queen Leila K. his first record, Hello Afrika – his declaration of love for his African home – broke all records. Alban Nwapa became Dr. Alban – a superstar. His debut-album Hello Africa sold roughly 1 million copies world-wide!
One year later this success was surpassed by the second album One Love. 1.6 million singles of the song It’s My Life were sold (the single was even used as background music for a Tampax advert). It was no. 2 in UK, no. 1 in Germany and Europe. The following single One Love was also succesful. The album immediately sold over 1.7 million units. Then followed the albums Look Who’s Talking and Born In Africa. All in all, Dr. Alban can look back on world-wide sales of over 5 million albums and over 6 million singles, which resulted in 7 times Silver, 30 times Gold and 30 times Platinum. These rather dry, but very impressive, figures leave no doubt that the Dance-dentist belongs to the group of International Mega-Stars. His hit No Coke was even used to illustrate an anti-drugs campaign in Sweden. The single Sing Hallelujah was also very successful.
After a re-release of No Coke, Dr Alban confirmed his Euro-dance style with his hit Look Who’s Talking Now, no. 6 at MTV Europe, and no. 54 in UK. Let The Beat Go On no. 12 at MTV.
He created his own record company ‘Dr. Records’, on which he released Born in Africa, the first CD recorded completely in his Dr. Records studios. He became the producer of many successful artists such as La Cream.
On the album, I Believe , he was able to work together with some of his own heroes, like Sly & Robbie, Freddie Mc Gregor, Beenie Man, Charlie King, a.m.m. and several exciting mixes have been produced by SASH! & DJ Quicksilver. The album featured many interesting tracks such as Long Time Ago which was also released as a single. More recently, his voice was featured on SASH’s single Colour The World.
After one year of silence he comes back with a new track entitled Because Of You, followed by What Do I Do and a new album, unfortunately, absolutely not Euro-dance related. Alban was very satisfied with the new album Prescription. Many hands have been involved in making this new album sound special. There are also guest appearances from Tony Rebell and Anthony B.
2002: DJ Alligator released a track featuring the voice of Dr. Alban I Like To Move It, the cover of the Real 2 Reel hit.
2003: Dr Alban released some new material, entitled Work Work.
In 2007 Dr. Alban has released new album Back To Basics. It is sold only on the Internet through official website, with exception for Russia where CDs and cassettes were issued.