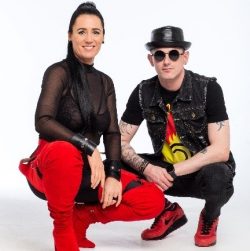 Maxx (short for Max-imum X-tasy) is a famous ’90s eurodance duo act best known for the hit singles: “Get-A-Way,” “No More (I Can’t Stand It)” and “You Can Get It.” The duo act achieved widespread popularity and success in Europe due to their creative mixture of ragga style rap, female singing and high energy dancefloor beats.

The most recognized lineup of Maxx during the ’90s included British singer Linda Meek and German rapper Gary Bokoe (Gary B.). The project was first formed late in 1993 by A&R music executive David Brunner (The Hitman) and music producer Juergen Wind (George Torpey) in Berlin, Germany.

Prior to forming Maxx, Wind had already achieved noteable success producing the 1993 Summer hit “Another Night” for his other successful dance music project, M.C. Sar & The Real McCoy (Real McCoy). He produced both projects with support from his co-producer Frank “Quickmix” Hassas (Dakota O’niel). As a producer duo team, they wrote and produced Maxx under the team name “The Movement” instead of their usual production team name ‘Freshline Records.’

Brunner received Wind’s executive producer credit for Maxx under his Maxx alias “The Hitman.” In reality, Brunner was responsible for the publishing, marketing, promotion, branding and distribution of the Maxx music in Europe. While developing the chorus lyrics and producing the music with Hassas, Wind enlisted the help of songwriter/producer Bruce Hammond Earlam to write the ragga rap lyrics for Maxx. For unknown reasons, Earlam was never officially credited for his songwriting for Maxx. Bokoe instead received Earlam’s songwriter credits while also getting false producer credits. Real McCoy rapper Olaf Jeglitza also received false credits for Maxx under the name ‘Dawhite’ due to his connections to the Freshline Records team.

German singer Samira Besic originally sang vocals for “Get-A-Way,” but for unknown reasons she was forced to depart the project shortly after recording vocals for the song. For the music video, a dancer/model named Alice Montana was hired to mime Besic’s vocals for the video and star in her place. She also took Besic’s place alongside Bokoe for the early promotional material for Maxx. The debut single “Get-A-Way” became a Top 10-hit in Germany upon release in October 1993 and almost overnight became a popular dance floor hit in night clubs across Europe.

In Februrary 1994, British singer Linda Meek was recruited into Maxx as a replacement for Besic. Upon joining the act, she recorded vocals for the followup single “No More (I Can’t Stand It).” The single debuted in March 1994 and became an instant Top 10-hit across Europe like it’s predecessor. The single reached No.5 on music charts in France and in Israel, and No. 8 in the UK. By mid 1994, “Get-A-Way” reached a sum total of 1.1 million in European record sales.

The major commercial success of both singles, motivated Wind and Brunner to release a new Maxx album titled “To The Maxximum.” The album charted at No. 22 in Germany and at No. 10 in Sweden and at No. 6 in Finland. Unfortunately, the album had still failed to perform well in critical territories like the UK only charting at No. 66. The album track “You Can Get It” was then picked to be the third single and was released in September 1994. The single reached No. 21 in the UK, No.13 in Finland and achieved commercial success in Scandinavia and Eastern Europe. However, the single did not reach the same level of commercial sales as “Get-A-Way” and “No More (I Can’t Stand It).” In October 1994, “Power of Love”, an uptempo Christmas themed dance track by Maxx, was released exclusively on a special Christmas iteration of the popular German compilation CD series titled Bravo Dance X-Mas.

By 1995, Maxx had begun to struggle to produce new dance hits on the music charts. The album track “I Can Make You Feel Like” was selected to be the fourth Maxx single in May 1995. The single failed to chart in critical territories and only reached No.56 in the UK. The final Maxx single titled “Move Your Body” was released in October 1995. The single heavily sampled the hit “I Like to Move It” by Reel 2 Real feat. The Mad Stuntman. The single charted in Austria peaking at No.18 and in Finland at No.16. but failed to chart in other critical territories. Due to declining record sales and major conflicts within the group behind the scenes, Maxx officially disbanded late in 1995.

Beginning in Summer 2017, Linda Meek (known today as ‘Elyse’) made her official return to live performing as Maxx with an all new rapper and now tours worldwide.